Autonomous behaviors for machines will be a frequent asked option. Individualized options or offerings on a universal scale becomes feasible. Artificial Intelligence, big data, IoT and others so called exponential as well as linear technologies enable content and experiences to be proactively tailored to the user with an unprecedented level of relevance along the whole industrial chains

In fact, the infusion of digital technologies into the basic ground of our society is the biggest transformation phenomena characterizing our post-industrial society during last 20 years or so. There is a clear tendency that is asking us to put machines, and the overall mechanization, at the heart of every process transformation, in every industry sector.

The ingredients that allow all of that are well known and include the pervasive capacity to interconnect things in networks to collect data from the physical world (Internet of Things), the wide availability and the ability to process huge quantity of digital data produced by humans and by machines (Big Data, Social) and the availability of more effective tools for data analysis to learn interesting phenomena from data collected (Analytics, Artificial Intelligence).

The human-machine relation is profoundly changing aiming to be as natural as possible.

All those technologies are following a “natural evolution path”, we could say with one sentence, that is aiming to add continuous values and improve each of them along various dimensions such as better performance, new efficiency, completeness of functions, new functions and so on.

Besides to this “natural evolution path”, more recently, a new emerging trajectory can be equally observed that considers all those technologies and perhaps others as a sort of elements of a larger equation. In other words, they can be merged and combined to create not only new technologies but completely new things (and new consumer needs someone could argue).

Well, If you consider just last 20 years or so, we learned to see computers as valid tools able to help us during our business as well as during our personal lives. Obviously one of the major contribute was coming from the introduction of Internet itself in our life and by the possibility to accumulate and search in an a huge quantity of data. We started, more recently, to recognize not only this foundation role and value of the so call digital transformation but we understood that what we are accumulating by each of us, as a group of ants, can provide a starting point to generate even an additional value.

More or less we started to label this phenomena in overall as a data-economy and data-driven society saying that the technology drivers of this transformation are Big Data, Internet of Things, Cloud, Mobile, Analytics and others let us consider digital data as the “new oil”.

This was/is/will be the first step. Let’s go ahead now.

We learned that once understood the digital data can provide even an additional value with respect the original content, so here came out a large part of the new spring of Artificial Intelligence & co more recently. This last is the key ingredient to transform “data points” into only into other data or metadata but into “decision points”, targeting all interested parties.

So we started to think how we can transform full businesses in new terms: “Powered by AI” is actually and right now the new slogan and mantra for many.

Artificial Intelligence, as a set of computational methods, is materialized in business terms with a number of names such as Cognitive Computing, Augmented Intelligence, Smart Machines or simply Machine Learning (for Business) and perhaps others.

The baseline is inherently the transformation of the computers from simple tools that have a complete “passive role”, more or less corresponding to the ability to manage a huge archive of data, into tools that could support someone, for professional reasons or not, to understand the reason for which he/she is searching into that archive of data.

We have now plenty of examples of systems that provide such a kind of abilities. Also their ability to communicate with humans improved a lot and we are starting to think to a computer not only in terms of keyboards, monitors or mouse rather into completely new kind of tools and devices.

Now we are entering into a new critical evolution point that I personally call “decision lakes“.

What are decision lakes?

Well they are a similar phenomena to what Big Data did with Data.

In other terms the AI & co is helping us to make a decision in a number of contexts and applications but at the same time it is exposing us to a wider solution searching space that perhaps includes decisions that we were even not able to figure out, easily or quickly at least, without an artificial help or artificial prosthesis.

We are moving from systems and technologies tools already support our decisions to more and more to systems that will take care of us.

Of course in this context another exponential concept is growing fast and is something different but strongly connected to the exponential technologies that are pushing digital disruptions and it is the ability to manage trust and ethics. 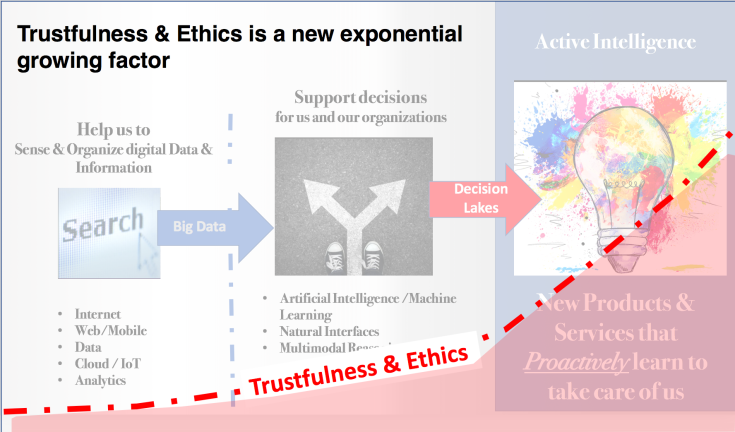 What is the practical result of this trajectory?

We are entering into a new step of the computing evolution, inexorably, that is driven by the combination of technologies to which I was referring at the beginning of this article and the creation of what I am referring here as Active Intelligent Systems.

As a consequence the tendency in IT to design things will be opposite of what we did so far: instead to think to a computer as a tool that helps to solve a problem we will think more and more in terms of completely new products and systems to invent.

They will be not simply Smart Products or Smart Objects that we obtain by adding a digital ingredient to transitional objects, rather they will be new products that aim and create new needs, we are creating de facto New Products and New Markets.

From a technical point of view, this combination of technology forces is enabling the creation of a new generation of systems that not only are able to learn new tasks but also have autonomous capabilities, presenting proactive behaviors and stimulation with respect to the environment or the process in which they are placed.

An Active Intelligent System can help us to cope with the problem we have to deal with Decision Lakes and the decision overloading.

Systems of this class are no more “passive” computational entities, rather they actively and pro-actively solve problems and tasks for us as well as, most importantly, potentially mediate us.